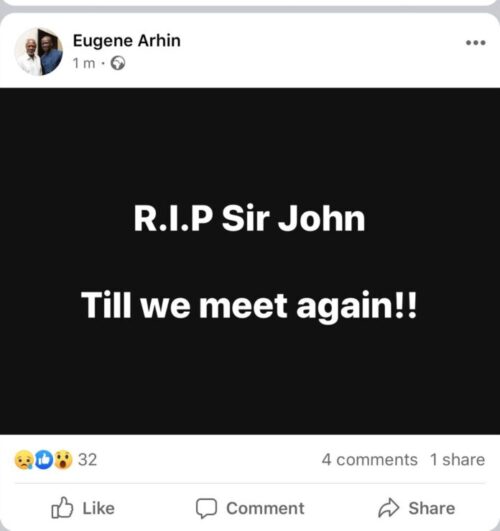 Gabby Asare Otchere-Darko also wrote on his Facebook timeline, “Only this afternoon I called to wish him a speedy recovery… This is truly shattering! Tough to swallow… Sleep easy, Sir John.”

Kwadwo Owusu Afriyie was born in the Ashanti Region.

He attended Seventh Day Adventist Secondary School in Bekwai from where he obtained his GCE Ordinary level certificate.

He then proceeded to obtain his GCE Advanced level certificate from Konongo Odumase Secondary School in Konongo.

Mr Owusu Afriyie was admitted to study political science at the University of Ghana after which he enrolled at the Ghana School of Law where he graduated with Bachelor of Laws (LLB).

He was then admitted as a solicitor and counsel for the Supreme Court of Ghana.

During the John Agyekum Kufuor administration, he was appointed head of legal services at the Ghana National Petroleum Corporation (GNPC).

He was later made to act as the Deputy Chief Executive Officer of the corporation.

While managing his firm, Afriyie was also actively engaged in Ghanaian politics.

He served as the General Secretary of the NPP from 2010 to 2014. He lost his bid to secure a second term to Kwabena Agyei Agyapong.