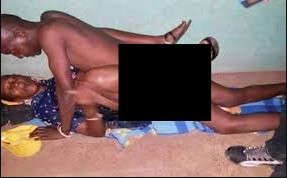 Video + Photos: Grandson Caught Chopping The Hell Out Of His Grandmother

Home  General News
An old woman has been caught in the act while having s3x with her young grandson in Kenya.

Everything clearly shows that the world can come to end anytime soon. Said to be in her 70’s was seen in the video receiving all the heavy punches from her 20-year-old grandson.

This shameful act took place in village in Kenya when shockedresident stumbled into the young man having s3x with his own grandmother andwhen they were spotted nak3d, the old woman told the horror stricken familymembers that her grandson was only helping her to shave her pu*bic hair.
READ ALSO:  ‘Becca’s Husband Married Her Because She Was Pregnant’ – Akuapem Poloo

An investigation made suggested that this isn’t the first time the old woman lure her grandson for rounds of sex as they have done it severally.
This time round our site policies do not permit us to embed the video here.