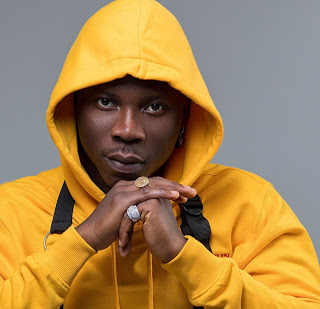 Dancehall artist Stonebwoy has made some exciting  revelations about the incidence which  took place between  himself and ace rival Shatta Wale at the 2019 edition Of the Vodafone Ghana Music Awarfs
It all happened when Shatta Wale and his militants  uninvitely mounted the stage while Stonebwoy  was receiving his award for Raggae Dancehall  artist for the 5th consecutive time.
Stonebwoy feeling threatened by this drew a gun, which cause commotion and scattering  at the event. The awards  were thereby  halted two topmost awards which were believed to certainly going to be won by the two of them these were the popular Song of the year and Artist of the year.
This led to the banning  of the two Dancehall giants .
Speaking with MzGee on 3FM showbiz927, the Tuff Seed hits singer said, the ban has done no major  harm to his career he said it’s a blessing in disgust.
He added that lefting  the Ban will be an advantage  for Vodafone  music  Awards.
.