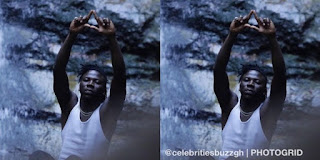 Dancehall musician, Stonebwoy has connected back to his roots at the Volta River located in Sogakope, Volta Region.
He shared photos of himself spending quality time with nature at the Volta River.
Well, fans are questioning just one thing about one of the photos he shared. And it’s about the ‘triangle hand sign’ Stonebwoy pulled.
Join Our WhatsApp Group
READ ALSO:  Stonebwoy marks 2 years of knee surgery with powerful message
This sign is believed to be mostly used by members of the Illuminati. This has got people asking if Stonebwoy is officially a member.
See the photo below:

“The triangle hand sign represents the all-seeing eye.
The all-seeing eye also known as the left or third eye represents in the occult illumination or enlightenment.
It originated in Babylon and Egypt and is often referred to as the Eye of Horus. It was adopted by the catholic church as the eye of providence but has also been used by secret societies to represent the all-seeing eye of enlightenment or the eye of intellect.
In the occult, it is often referred to as the eye of Lucifer and covering the right eye symbolizes the rejection of the right path which represents wisdom.
READ ALSO:  Fancy Gadam endorses Supa over Gariba
The belief that through illumination or enlightenment by lucifer they can become gods. It is a sign of their allegiance to Lucifer.”
CLICK HERE to Earn a recognize Executive Masters Degree within ONE WEEK with Switzerland School of Business Management in Dubai