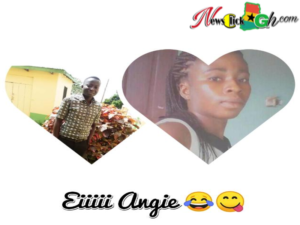 Saddest heart broken news hit fosco.According to the Investigation of NEWSCLICKGH   A guy mostly knows as padmore was having a girlfriend in the School called Angela. he has been feeding this Girl, buying things for her but not knowing the girl has another boyfriend in Fosco town. on 12th October around 11 to 12am, Angela’s guy in fosu town came around which we all don’t know him but as we where asking the guy where he is from and what he was doing at campus at that odd hours. All of a sudden padmore came to take a picture of the guy , but immediately the guy saw padmore he mentioned his name, This was serious , it means Angela has been telling his town guy about padmore and even shown padmore’s pictures to him that was why he was able to mention padmore’s name. So we dealt with the guy so after we came back to the dorm the reaction padmore dis means he has paid a lot to the well being of the girl. what came from padmore’s mouth was “Eeeiiii Angie” so this has been the anthem of Fosco now. the reason behind the Students wearing the School Cardigan was that in that odd hours when the guy came to the Campus he was wearing that cardigan which we don’t know where he got it from. So to conclude we say Eeeiii Angie to support pardmore and we wear the Cardigan too to support Angela.

Watch the video below the link