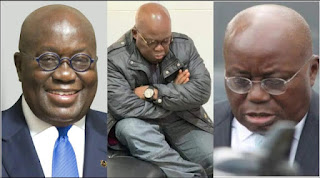 I can’t remember sleeping in public. I only bow to pray for Ghana – Prez. Nana Addo
Many people sleep to relief stress, boredom after a long day work. Normally, no human being will like to sleep in public during an occasion. There were rumors and alleged pictures circulating on the mass media claiming to have been the President of the Republic of Ghana H.E Nana Addo Dankwa Akufo-Addo sleeping in public, during programmes.
Ghanaians home and abroad after seeing the alleged pictures criticised the president. Some say, “he is drunk, tired of ruling the country, others say, he is sleeping on the job and the most funny one is, people called him, Mr. Sleeping sickness or sleeping tablet.” It’s rather sad to have witness many social media users describe the president of the Country with certain words in public meanwhile, sleeping is involuntary and no one can control it.
These, went a long way to generate debate and argument among political parties footsoldiers on social media.
The President, having observed the bad assertion on his reputation, clears the airwave on the matter.
According to the President, he cannot remember the last time he slept in public during a programme as many have alleged.
He added that, what he does, during programmes was to bow his head and pray for Ghana and her citizens. He does that due to the love he has for Ghana.
“I usually take any little opportunity to say some prayers. So, those pictures floating on social media is not saying the truth.” He explained.
The President also disclosed that, he mostly spent at least 3 hours daily praying for direction from God, on how to rule Ghana among other countries in the World for peace and development. As a result, he sometimes take some times to meditate even during programmes.
He further explained that, though no one can control sleep, he never slept in public and will never do such a thing.
Do you agree with the President? Share with us your thoughts.
Join Our WhatsApp Group