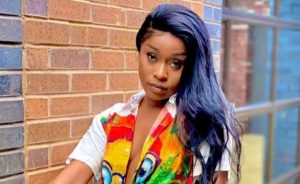 Ghanaian actress and model Efia Odo has given people her reason to leave this world.

According to her, she thinks she needs to evacuate from this world. Because the world is full of lies now and there is no truth on this planet.

The recently dominant actress on the entertainment blogs for sharing some secrets about her life in a new interview appears to be wasted living in this world.

As she has been exhibiting a satisfying lifestyle on social media, it’s assumed that everything is fine with the. Ghanaian slim shaped actress and the model. But it looks like it’s not alright with her.

The model who is a socialist indicated that everyone hates the truth so she thinks there’s the need to leave the world. (We have no idea where she would move from leaving the world).

Her statement comes after she disclosed in an interview, a few days ago, her source of income. When she said she doesn’t do “Hook-Ups” because she is not into prostitution or fraud. But survives by advertising products on her 2.1M follower page and get paid as a brand ambassador.

Also, Efia revealed that she charges Ghc 30,000 per Instagram post. This, however, got people to blast her that she is telling an untruth.

She has reacted by saying, I now see that everyone hates the truth, guess I need to leave this world full of lies.