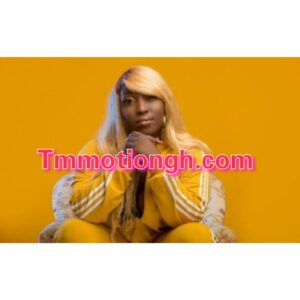 Medikal’s description of Eno Barony as a corpse has elicited a response from the female rapper who says she has always been a corpse because she was born dead.

Amidst speculations his next single ‘Nonsense’ will be a response to Eno’s jab for which reason the female rapper has also scheduled the release of ‘Force Them To Play Nonsense’ as a counter, Medikal in a tweet said he would use his time judiciously than engage in a lyrical battle.

The statement, however, did not come without a jab as the Tuesday tweet read: “Don’t ever think I will waste time recording a diss track to a female rapper, expecially when the person looks like corpse. Issa dead tin.”

Medikal further mentioned that he is unperturbed about the barrage of insults Eno would hurled at him in her subsequent releases because his works will always be very much appreciated by music enthusiasts but same cannot be said of Eno.

He recalled doing Eno Barony a favour some years ago and expressed surprise over why she would rather pay him back with utmost disrespect.

He said: “4 years ago, Eno Linked up for a feature, gave her a verse and pulled up to shoot the video when called without charging a penny. Never expected her to disrespect me in anyway, especially when I haven’t wronged you. This is why people don’t do good sometimes I guess.

“You could have linked up again after all those years for another verse cuz I am hotter than I was back then! But no, Human being, you would rather put dirt on my name for clout than get a hit song you can chop from.”

But Eno in response said she never disrespected Medikal. According to her, she only threw jabs at a ghost writer.

“I appreciate u doing a verse for me way back and I have never disrespected u in any way nor for clout chasing I only sent out words to the ghost writer and unless u are the ghost writer u can’t feel disrespected. Understand my lyrics first Mr. best rapper,” her tweet read.

Eno Barony is said to have slammed Medikal in her ‘Argument Done’ upon suggestions that he wrote ‘You Got Nerves’ for Sista Afia.

‘You Got Nerves’ was a song directed at Eno and Freda Rhymz, according to analysts, as both rappers had released songs as responses to Sista Afia’s ‘WMT’ which was released earlier.

The duo did not take it lightly when Sista Afia, who is known to be a singer claimed she was the best rapper amongst females.