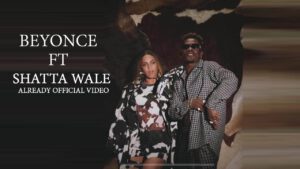 The video which is exactly how it was anticipated is actually not so close to the video that was leaked weeks ago.

Surprisingly some parts of the video appear to have been shot in Ghana as a goat market and a ‘kiosk’ bearing the popular ‘A.M.A’ warning were seen in the video.

Again, some dancers were seen dancing on a street that looked so much like a part of Accra which sellers and kids gathered to watch the dance moves.