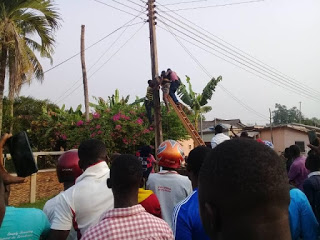 The lifeless body of Ademi Joseph removing from the pole.
An electrician was found dead on ECG pole at kpando. According to those who identify the deceased, identify him as an 33years old man of age with his name Ademi Joseph who works with a private electric contractor.According to eye withneses , said he was found dead on ECG Low voltage line at kpando in the volta region, in the attempt of replacing a Street light on Sunday.The body of the dead Ademi Joseph was subsequently removed from the pole and was despited at Margret Marquart Catholic Hospital Morgue at kpando. The incident was feathre  reported to the police for feather investigation.According to Mr Benjamin Obeng Antwi, the Volta regional ECG public Relations Officer, identify the deceased as unauthorized electrician by the district office.He feather advise the general public not to patronize unauthorized electrician, which may lead to such incident in the country. 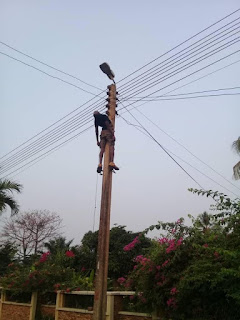